How to solve sudoku – ways, methods and strategy 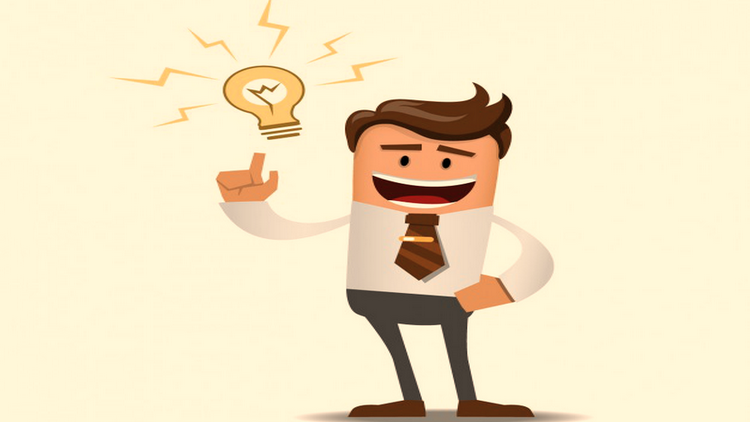 Other
Author BrainApps Reading 9 min Views 10.7k. Published by 02.06.2018
Contents
Sudoku is a popular form of leisure, which is a puzzle with numbers, which is also called a magic square. Its solution allows us to develop logical thinking, attention, analytical approach. Advantages of Sudoku are not only in the use of the brain, but also in the possibility of distracting from problems, concentrate fully on assigning.

This puzzle takes up little space, unlike scan words, crossword puzzles and so on. The game field, consisting of 81 squares, cells are divided into small blocks, 3 * 3 in size. It can be easily placed on a piece of paper. The task is in the form of selectively filled cells, which need to be supplemented with values and fill the whole plate. In Sudoku, the rules of the game are very simple and allow you to exclude multiple solutions. In each row or column, numbers from 1 to 9 are entered. Also, the values are not repeated within the same small block. 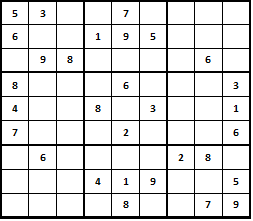 Sudoku differ in the level of complexity, which depends on the number of cells filled with numbers and methods of solution. Usually there are about 5 levels, where only the real masters can solve the most difficult level.

Playing in Sudoku has its own rules and secrets. Simplest puzzles can be solved in a few minutes by deduction, as there is always at least one cell for which only one number is suitable. Complex sudoku can be solved for hours. A properly composed puzzle has only one way to solve.

Rules how to solve Sudoku

In order to get the right decision, you need to take into account a few simple rules:

If both rules are taken into account, then you can be sure that the cell is filled correctly.

How to solve simple sudoku?

Consider a specific example of how to solve Sudoku. The game field in the picture is a relatively simple version of the game. The rules of Sudoku for simple games are reduced to the identification of dependencies in the horizontal and vertical plane and in individual squares. 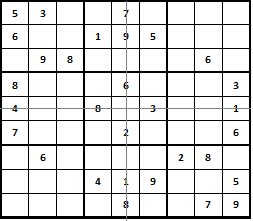 For example, in the central vertical there are no digits 3, 4, 5. The four cannot be in the bottom square, because it already exists. It is also possible to exclude an empty central cell, since we see 4 in the horizontal line. From this we conclude that it is located in the upper square. Similarly, we can put 3 and 5 and get the following result. 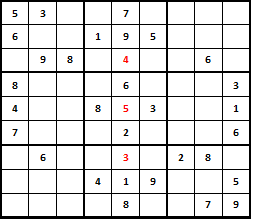 Drawing a line in the upper middle small square 3 * 3, you can exclude cells in which there cannot be a 3 digit. 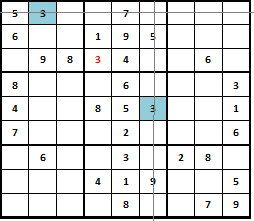 Solving this way, it is necessary to fill in the remaining cells. As a result, the only correct solution is obtained. 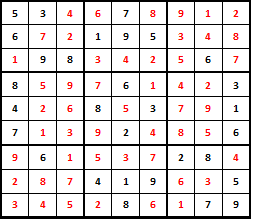 Some people call this method “The Last Hero” or “The Loner”. It is also used as one of several at the workshop levels. Average time spent on a simple level of complexity is around 20 minutes.

How to solve complex Sudoku?

Many are wondering how to solve Sudoku, whether there are standard methods and strategy. As in any logical puzzle there. We considered the simplest of them. To go to a higher level, you need to have more time, perseverance, patience. To solve the puzzle will have to make assumptions and, perhaps, get the wrong result, returning to the place of choice. Essentially, Sudoku is complex – it’s like solving a problem using an algorithm. Consider several popular techniques used by professional “Sudoku-players” in the following example. 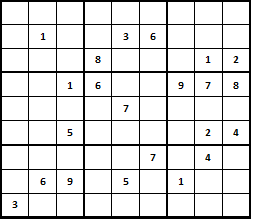 First of all, it is necessary to fill empty cells with possible variants in order to facilitate the decision as much as possible and to have a complete picture before your eyes. 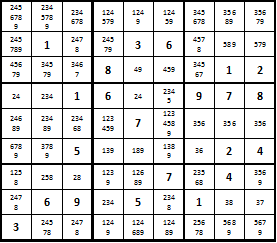 The answer how to solve complex Sudoku for each is one’s own. To whom it is more convenient to use different colors for coloring cells or numbers, someone prefers a black and white version. The figure shows that there is not a single cell in which there is a single digit, however, this does not mean that there are no loners in this task. Taking into consideration rules of Sudoku and an attentive eye, you can see that the upper line of the middle small block is number 5, which occurs once in its line. In this regard, you can safely put it and exclude from the cells, painted in green. This action will entail the possibility to put the number 3 in an orange cage and safely delete it from the corresponding purple vertically and a small 3 * 3 block. 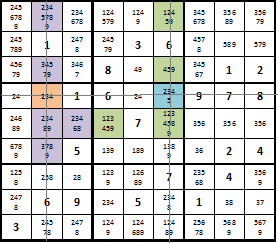 In the same way we check the other cells and put the units in the circled cells, since they are also the only ones in their lines. 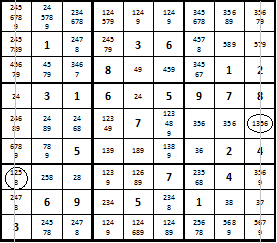 To understand how to solve complex Sudoku, you need to take into account a few simple methods.

To clear the field further, it is necessary to find open pairs that allow you to exclude the numbers in them from other cells in the block and lines. In the example, these pairs are 4 and 9 from the third row. They clearly show how to solve complex sudoku. Their combination suggests that these cells can only be marked with 4 or 9. This conclusion is made on the basis of the rules of Sudoku. 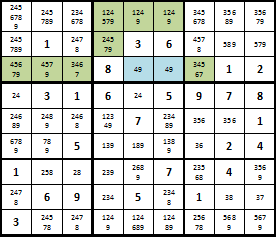 From the highlighted green cells, you can remove the blue values and thereby reduce the number of options. In this case, the combination of 1249, located in the first line, is called by analogy “open quartet”. Also, you can meet “open threes”. Such actions entail the appearance of other open pairs, for example 1 and 2 in the top line, which also make it possible to narrow the range of combinations. In parallel, we place in the enclosed cell of the first square 7, since the five in this line will in any case be located in the lower block. 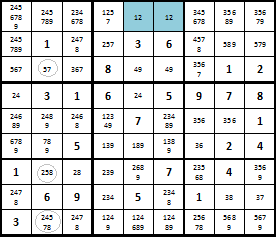 This method is the opposite of open combinations. Its essence lies in the fact that it is necessary to find cells in which the numbers within a square / line are repeated, not found in other cells. How will this help to solve Sudoku? Reception allows you to delete the remaining numbers, since they serve as a background and cannot be affixed to selected cells. This strategy has several other names, for example “Cell is not elastic”, “Secret becomes clear”. The names themselves explain the essence of the method and the conformity to the rule, which says about the possibility to put a single digit.

An example is the blue-colored cells. Figures 4 and 7 are found exclusively in these cells, so the rest can be safely removed. 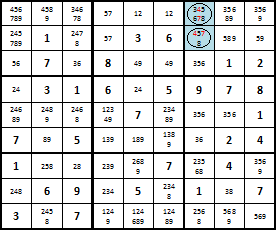 Similarly, the pairing system works, when it is possible to exclude from the cells of the block / row / column values that occur several times in the neighboring or conjugate.

The principle of how to solve Sudoku lies in the ability to analyze and compare. Another way to exclude options is to have any number in two columns or lines that intersect each other. In our example, this situation is not met, so consider the other. The picture shows that the “deuce” occurs in the second and the third middle block once, with a combination of what is connected, and mutually exclusive. Based on this data, the number 2 can be deleted from other cells in the indicated columns. 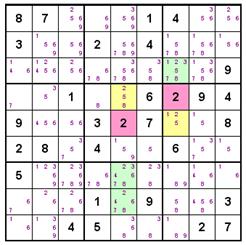 It can also be used for three and four lines. The complexity of the method lies in the difficulties of visualization and identification of links.

As a result of each action, the number of options in the cells is reduced and the solution is reduced to the “Loner” method. This process can be called an abbreviation and a separate method, since it involves a careful analysis of all rows, columns and small squares with successive exceptions. As a result, we arrive at a unique solution. 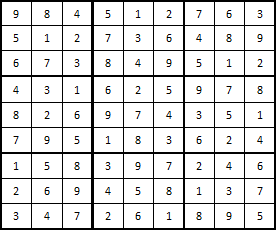 This strategy differs little from the described and consists in the color indication of cells or numbers. The method helps to visualize the entire course of the solution; however, it does not suit everyone. Some colors are knocked down and prevented from concentrating. In order to correctly use the gamma, it is necessary to choose two or three colors and color the same variants in different blocks / lines, as well as the controversial cells.

To understand how to solve Sudoku, it is better to use a pen and paper. This approach will allow you to train your head, in contrast to the use of electronic algorithms with hints. The BrainApps team reviewed a few of the most popular, understandable and effective techniques, however, there are many other algorithms. For example, the “Cut and try” method, when a trial version of two or three possible is selected and the entire chain is checked. The disadvantage of this technique is the need to use a computer, since it is not so easy to return to the original version on a piece of paper.

Why do we consider the human brain unique?
he brain is the most complex organ in the human body.
10.7k.

7 pleasant ways to spend your leisure time with brain benefit
If you don’t know what to do in your spare time
10.7k.

IS THE BRAIN OF THE TEST-TUBE A REALITY?
Scientists have obtained stunning results in an experiment
10.7k.

What causes Déjà vu phenomenon?
Without exaggeration, it can be argued that 98% of
10.7k.

Talent and intelligence – a threat to achievement
Installation on a given and on personal growth is a
10.7k.

EMOTIONAL INTELLIGENCE — KEY TO SUCCESS
At the dawn of its existence, emotional intelligence
10.7k.

How to improve brain performance?
The human brain is the organ through which we receive
10.7k.